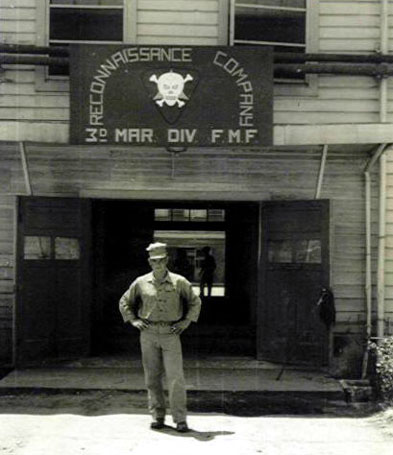 The Third Marine Recon Company was mobilized to Camp McGill in Japan in 1953.
Charley was a member of Reconnaissance Company, Third Marine Division FMF from early 1954 to May 1955
and it was at that time only a company within the division.

They were the first company to initiate "Scout Swimmers" who were inserted via helicopter and the first Recon Company to send
members to Fort Benning Georgia to attend parachute courses. In fact, the forerunner to the Seals

Please do add the photo. I have a good friend that served in 3rd. Recon Battalion, Dennis Wright, and we've swapped lots of good war stories.
Good luck on your reunion. Wish I could attend but alas I am home with terminal cancer, so am planning instead to attend that great muster in the sky.

Anyone who may have known Charley is encouraged to email his family.

This was read at Charleys Funeral:

Thunderstorms are beautiful. And, if you sit on your front porch and wait for the tornado to get you, it probably won’t.

The back of a motorcycle is not a good place to take a nap.

It doesn’t matter that you know dad’s waiting around the corner to scare you, you still jump out of your skin when he hollers, “boo”.

It doesn’t matter if you use his razor just once to shave your legs, he’ll still know.

Imagination is a wonderful thing.

The macaroni and cheese man, AKA boogie man, does not exist, but don’t forget, dad is waiting around the corner to scare you.

The difference between satellites and stars.

Forgiveness heals the heart and soul.

When the music gets suspenseful on TV, dad is going to yell and scare you.

It doesn’t matter whether you call him Dad, Round Man, or What’s-His-Name, he’d still answer.

No matter what wrongs you may believe others have done to you, at the end of the day you have to decide, “What kind of person am I going to be”.

You are in all our prayers Charley!!!